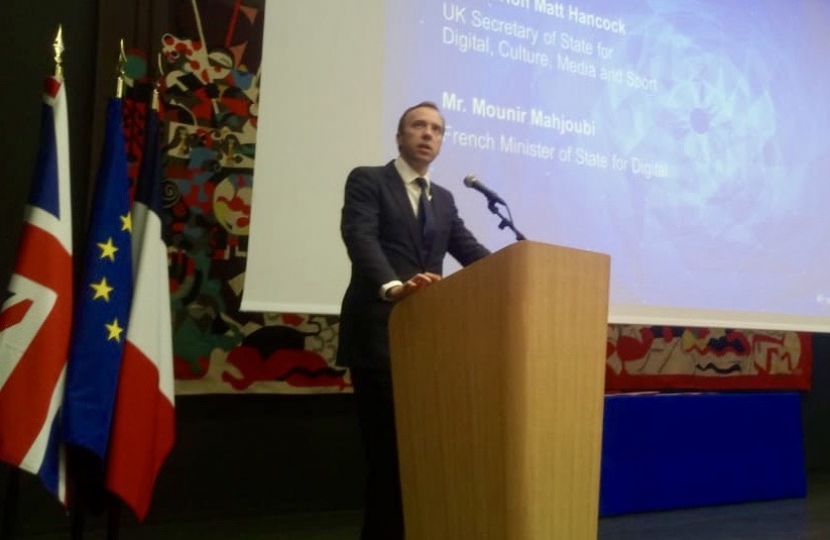 [One of this city’s most famous thinkers, Voltaire, once said friendship is our natural soil]

[And the friendship between the UK and France has not only endured, but has grown stronger and stronger over time.]

[158 years ago, our two nations signed the first modern trade agreement, showing the world our commitment to openness and prosperity.]

[And a century ago, we were at each other’s side during our toughest times, as I will see first hand when I attend the Commemoration for the Battle of Amiens next month.]

[This friendship has continued right up until the present day. President Macron recently described our capital as France’s sixth largest city, due to the 400,000 Londoners that were born here in France.]

[It’s the progress that we have forged, together, through technology, that I want to talk about today.]

Our two nations have worked on some of the world’s most pioneering inventions, like the Channel Tunnel and the Concorde.

And we have found common ground on issues, both big and small, because we share value.

When we were working on Concorde, there was a disagreement about whether or not there should be an ‘e’ on the end of its name. The spelling was even discussed at the British Cabinet.

Eventually there was a compromise. The French spelling would be used but it would be announced that the ‘e’ stood for England, Europe and the entente cordiale.

The British Minister for Technology was then asked why the E stands for England when the nose of the plane was made in Scotland. He paused and replied ‘The E also stands for Ecosse…’

On both sides of La Manche, we are continuing to embrace new technologies and the benefits that they bring.

And in the UK we are seeing our own tech renaissance, as we are increasingly recognised across the world as a place where ingenuity and innovation can flourish.

We have a tech landscape that combines major players like Uber and Apple, alongside thriving new start ups and scale ups.

The results have been exhilarating. The UK is the home of four in ten of Europe’s tech unicorns.

And London is the AI capital of Europe.

And we want to keep this momentum going. A few weeks ago, during London Tech Week, we announced a landmark package of support.

And opening up our visa system to support accelerators with a new start-up visa, to help bring business founders to the UK.

I want the message to go out loud and clear: we want to be the natural home for the world’s top tech talent.

And my fundamental belief that brings me here is that this is strengthened by strong neighbours.

And I admire the great work that Monsieur Mahjoub​i and President Macron have been doing on this.

I’ve seen it first hand. For instance, take a great French company that is competing on a global scale as a platform.

Deezer is a real French tech success story and it has now expanded to 180 countries across the world. And as a platform, it is taking on the American giants globally.

And at the other end of the scale, Station F shows the energy that is being put in to fostering the tech pioneers of the future.

One of the things I like to say about the UK is we’re at our best when we’re combining the best of the old and the best of the new. And here in France you do this brilliantly too.

And I strongly believe at the core of my being that this is great news for us all. Because the strength of European tech ecosystems is no zero sum game.

A strong France begets a strong Britain. They are two sides of the same coin.

So I am thrilled, for instance, that this year Samsung has announced both a new world-leading AI centre in Cambridge and a research and development hub here in France.

And that Entrepreneur First, the London based start up accelerator, is opening a new international office here in Paris. And over breakfast I was talking to a company that wants to do the same in the other direction.

Partnerships like these show the strength and depth of our tech industries.

And just as has been the case throughout history, this prosperity been underpinned by a constant exchange of ideas.

And Charles Dickens’ most celebrated works were inspired by his frequent trips to Paris.

We need to summon this spirit for our newest frontier. Making sure technology is harnessed for the greater good.

And the path that we chart over the next few years is so important in making this happen.

Over centuries, our nations have been beacons for liberal values like freedom, consent and the rights of the individual.

And I want our two nations to be working together, to make sure these values are writ large and in the underpinning architecture of new technologies as they are developed.

In the UK we have recently established our new Centre for Data Ethics and Innovation.

A world-class advisory body to make sure data and AI delivers the best possible outcomes for society, in support of its innovative and ethical use.

I am delighted that Roger Taylor, who is leading this, is here today.

Get it right and strong ethics underpin strong innovation. And an architecture that thinks in advance about how the technology will be made and used for the good of humanity will lead to more and not less innovative use of this technology.

And this is an issue for us all, transcending borders and nation states.

We will only retain what makes technology great if we work together, to keep it great and working for humanity.

So I was delighted to see that a new agreement is being signed today, between the UK’s Alan Turing Institute, our cutting edge research institute, and France’s DATA I A.

They are both doing vital work in data science and AI and this agreement is the first stage in a closer and stronger working relationship.

And of course, the free flow of data is just as important as its ethical use.

Data is such an important part of our infrastructure. For AI systems, data is the experience needed to be able to develop and interact usefully with the world around us.

So transferring data across borders is essential for a prosperous modern economy.

In the UK, we have applied GDPR standards, to give citizens control over their data, ensure common rules and help our businesses trade abroad.

We will maintain these standards when we leave the EU. Not because we have to but because we want to, because we think that they are a strong basis for the protection of data.

And on that basis, we are seeking a deal that supports cross-border data flows. And I’m delighted that France is such a strong supporter of that goal too and I am confident that we will reach it.

And a word on regulation. Ultimately freedom exists in a framework of rule of law and of norms.

Some of these norms are statutory, like regulations, but many of them are also designed by and come from society. The norms and standards that we abide by in able to interact.

And this is as important for the new technology today and tomorrow, as it was for the old etiquette of the last centuries.

The norms and standards of behaviour, both at a high ethical level, and at a technical detailed level, do not always have to be borne of Government, but they strengthen our ability to work together and to innovate together.

This co-operation is crucial, socially and economically. But I just wanted to mention something even bigger than that.

Liberal democracies must stick together in the face of threats from around the world.

These threats are now not only physical, but to our technology, and ultimately they threaten our way of life.

And so believers in the freedom and dignity of humankind must progress together.

We seek to ensure that this technology is advancing so fast, and giving so many benefits, works for the benefit of humankind, within a democratic structure.

[And in our era, our challenge is these data-driven technologies that are transforming our economy and society beyond recognition.]

[If we get them right, and work with other nations to do so, it will lay the path for productivity, prosperity, and a better quality of life.]

[That is why this colloque is so important. Bringing together some of our greatest minds, to discuss the big issues and opportunities that lie ahead.]

[So please keep creating, innovating and making the impossible possible.]

[Because technology was forged by humankind. So we need to make it work for humankind.]

[This is our mission, together.]