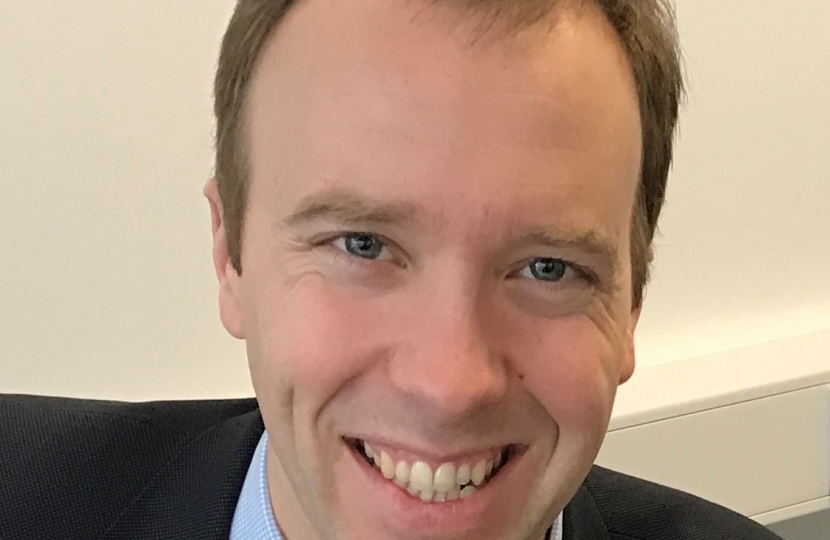 It is fantastic to be here in Newcastle.

Tomorrow I will be launching the Great Exhibition of the North, a celebration of everything that is great about the North of England.

This is a unique opportunity to celebrate the exceptional creativity here and to inspire the next generation of innovators.

The Exhibition will feature 80 days of events, looking ahead to the economy of tomorrow and the role that the North of England is playing in shaping our future.

And we cannot think about the future without thinking about technology.

Technology really is transforming everything.

In fact the combined user base of Netflix, Airbnb and the Matt Hancock app is now over 300 million…

I like to live and breathe technology and that is why I really wanted to come here to today’s Dynamo Conference.

Last week was London Tech Week and we were talking a lot about how the UK is a digital dynamo.

We are a nation of pioneers, and the truth is that we have out to the West in the United States, and out to the East in China, two tech giants.

The prosperity that comes from this technological revolution, and the success that underpins it, can only happen and is only worth shouting about, if the benefits can be shared right across the country.

So I wanted to talk about what we’re doing to support digital dynamos like you in the North East and all across the country.

It is a critical goal of our Digital Strategy to make sure that the considerable benefits of our tech industry get outside of London.

This is also true also in our creative industries. I am delighted to be working with Channel 4 who are creating a new National HQ outside London, bringing real benefits from what they do.

The North East has played a huge part in that. And it has played that part through history.

From Stephenson’s first railways to the incandescent lightbulb and of course the industrial heritage here.

Now in the modern era, it is home to the 30 million pound National Innovation Centre for Data, which opened last year to harness the power of data.

Newcastle is home to 30,000 digital and tech jobs - and it is the fastest growing tech economy outside of London.

The North East is home to some of the UK’s tech powerhouses, like Sage, our second largest technology company.

And then we have some exciting new tech firms. Tomorrow I’m seeing True Potential in Newcastle, which is the only UK fintech firm to have been in the Deloitte Technology Fast 50 for three consecutive years.

This is all boosted by the research universities in Newcastle and Northumbria. And from strong support networks like our hosts today here at Dynamo North East.

But the point is that when you have the second largest tech company in the country, the fastest growing area and 30,000 tech jobs there is something special going on. We want us to support it and see it grow.

There’s a couple of other things I want to mention which I think are critical to making this happen. The first is talent and skills.

The task here is to make sure that we keep getting the brightest and the best from around the world and also that we do much more to support our home grown talent.

We have put in place something called the Digital Skills Partnership.

The aim of this partnership is to improve the digital capability that is needed right across the country.

And building local partnerships to tailor digital skills training to the needs of the local community.

The point of the Digital Skills Partnership is this. If we in Government try to solve the skills shortage in tech on our own we will get it wrong. We will be training people with outdated capabilities and we will do far less than needs to be done.

The Digital Skills Partnership, yes, has Government at its core and we convene it. It has universities and academia, but it also has the companies that are the beneficiaries of this tech talent as part of the partnership.

And we launched just last week the second of these local partnerships and there’s plans for four more across England later this year.

We’re working with North East and Tees Valley LEP to see how we can develop a new partnership here and I really want this to become a reality.

The private sector has a critical role to play in making this happen. Tech firms are showing great leadership on this issue.

That’s going to open its doors this year on the site of Stephenson’s original railway workshop.

It’s only by delivering the skills that businesses need that we’re going to get this right.

The recent Tech Nation report showed that skills was the biggest concern for tech firms in Newcastle and Sunderland. And we are determined to tackle the problem but we need to do it in partnership.

Conditions for starting and growing a digital business

The next thing I want to touch on is make sure we get the conditions right.

We have a key objective in making our country the best place in the world to start and grow a digital business.

Almost five million extra homes and businesses have been connected to superfast broadband thanks to the Government’s investment.

And at 97.2%, the North East has the highest coverage of superfast broadband in the country.

And we’re now looking at the next frontier, at the 5G and the full fibre rollout, where we have invested over a billion pounds.

And we’re working with local authorities, here and across the rest of the country, to make sure that we get that rollout going.

A strong digital infrastructure is vital to power the next generation of emerging technologies, especially those heavily reliant on data like AI.

And then there’s access to finance, which of course is vital to companies in their early stages of development.

Just last week we announced £2.5 billion of extra funding by the British Business Bank, to unlock over £10 billion of finance and support new UK businesses in their ambitions to grow.

It will invest alongside private capital because we want to make sure the investment goes to places with a good business case.

This isn’t just a rebranding but reflects our commitment to supporting tech pioneers wherever they are based.

Tech Nation will support 40,000 entrepreneurs and up to 4,000 start-ups as they scale their businesses across the country.

And along with this work, we want to connect British businesses across the UK with potential investors and partners across the world.

Hedgehog Lab, with its headquarters in Newcastle, is breaking ground in AR and VR, and now has offices in Denmark, India and the USA.

I want all firms to have these opportunities.

And then we’re expanding a range of tech hubs between the UK and different countries, based in embassies, to make sure that when people go abroad there are the connections and meeting points.

We launched our first one in Israel and since then we have launched another in India. And we’ll be launching more hubs in Brazil and South Africa to help tech companies go global.

For example, as part of the Indian hub, the North East will be linked to Karnataka, the home of the Indian Space Research Organisation and several hi-tech manufacturers.

So with all the new technology in development, we are clear that there is a role for us in Government to help this great industry to grow right across the country.

To make sure we get the infrastructure, the skills, the finance and the business support in place.

The North East was pivotal to the first industrial revolution.

Some call this the fourth industrial revolution and I am absolutely determined to do what I can to help you to be pivotal to this one too.

Focusing together on the skills and the conditions for technology to thrive, to shape our society and our economy for the better.

I think it’s a very exciting opportunity and I look forward to working with you to make it a reality.