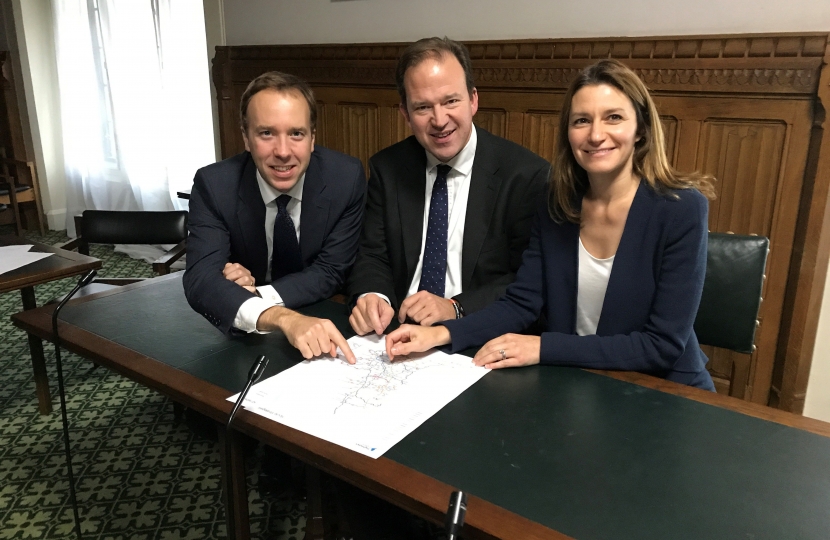 Matt and Lucy Frazer MP (South East Cambridgeshire) met with the Parliamentary Under Secretary of State for Roads, Local Transport and Devolution, Jesse Norman MP, to push for the inclusion of Junction 37 of the A14/A142 and Junction 38 of the A14/A11 in the Government’s up-coming Road Investment Strategy 2 (“RIS 2”), which will invest significant sums in the country’s strategic road network (the country’s busiest and most strategically important roads).

Matt and Lucy highlighted to the Parliamentary Under Secretary of State the significance of Junction 37 of the A14/A142 and Junction 38 of the A14/A11 to the region’s economy and the essential role these junctions have to play in unlocking the huge potential of Cambridgeshire and Suffolk, already two of the country’s most economically successful counties. Lucy and Matt also drew attention to the considerable challenges with capacity and safety that both of these junctions currently face, pressing hard for the Parliamentary Under Secretary of State to prioritise them when deciding which roads should benefit from RIS 2 status and which projects should be considered for RIS 2 funding.

Matt said “Lucy and I had an excellent meeting with Jesse Norman, the roads minister. We were able to stress the need for A14/A142 junction to be included in RIS 2, as well as the need for improvements to the Fiveways roundabout. The case for including them as part of the investment by the government in the roads network is incredibly strong. Improving these areas will not only reduce the number of tragic accidents, but will free up the road network, thus benefitting the local economy. This meeting was an important part of my campaign to bring better roads to West Suffolk.”

Lucy said “I was delighted to join Matt in meeting with Jesse. I have been fighting hard to ensure that South East Cambridgeshire’s roads are a top priority for the Government when it comes to receiving funding for essential projects such as improving the junctions on the A14/A142 and the A14/A11. This meeting provided yet another opportunity for me to highlight to the Government the considerable benefits investing in these roads would bring. I intend to keep up the pressure on the Government to include our roads in the RIS 2 and am determined to work closely with local authorities over the coming months to put together the strongest possible bids when it comes to applying to be part of the strategic road network.”