The most innovative healthtech is happening in the North speech 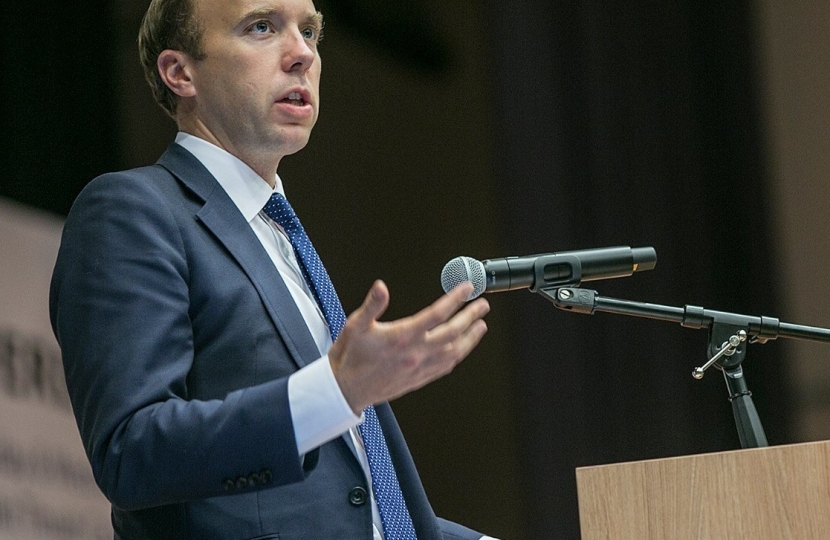 For me, the North’s always been a place where people make things happen.

I was lucky enough to witness first-hand the brilliant scientific minds at Daresbury Labs during a summer job aged 17.

My mum was part of the pioneering team at Manchester University that worked on one of the first modern computers.

And today the most innovative, world-leading healthtech is happening here, in the North.

So when I talk about the North, I’m talking about where I’m from, and the people I grew up with.

And anybody growing up in the North of England knows too many of the decisions have been taken too far away, and the Northern Powerhouse is about getting those decisions back to where they should be.

It’s about the North spurring innovation across the country, for the benefit of the entire UK economy.

More people live in the Northern Powerhouse area than live in the whole of Greater London. The economy and innovation here has so much potential – but the connections of governance, transport and communities aren’t as strong as they should be.

Today, I’d like to talk about what the Northern Powerhouse means to the NHS, and to make a broader argument about why the NHS is important to the economy.

Because we often talk about the NHS in terms of the deep emotional bond we all feel towards our health service. And for good reason, because that bond is rightly emotional for each one of us, whose lives have been saved or transformed by having the NHS there for us and our families.

But today, I want to talk about a different kind of contribution the NHS makes here:

Let’s look a little deeper at those 3 parts. In each area, the NHS is a huge asset, but could do much, much more.

First: helping people get into work and stay in work.

Each one, not just a statistic: poor health robs people of financial security, undermines the dignity work brings, and risks a vicious cycle, because being out of work negatively impacts our mental health and wellbeing, and makes our physical recovery less likely.

But it’s more than that: it’s a question of social justice. Too often, disabled people, neurodiverse people and people with mental health conditions face discrimination in the workplace.

It’s easier for employers to choose someone else or let someone go than to adapt, but it’s also short-sighted.

I firmly believe that everyone has something to offer, and in a knowledge-led economy, it’s vital that we harness everyone’s talents.

NHS England is going to help thousands more people with mental health conditions get the support they need to find the right job for them.

And we’re coming together with Amber Rudd and her team at the Department for Work and Pensions to give more support to people with physical and mental health conditions to find jobs to help them to fulfil their potential.

This approach ‒ collaborative and cross-government ‒ is at the heart of the new prevention agenda in NHS Long Term Plan.

I’ll give you just one example. Soldiers have an 85% return-to-work rate after a serious injury, and they obviously have some very serious injuries. The equivalent rate for civilians is just 35%.

Why’s the military better at getting people back to work?

Partly, it’s because, as an employer, they’re so much more engaged and invested in their people’s recovery. They recognise that recruiting and training new soldiers costs more time and money than doing what it takes to hang on to your experienced and talented staff.

Why does this matter for the Northern Powerhouse? Health inequality costs the North more than £13 billion a year. But, of course, it’s more than just money.

It’s about people’s quality of life and their life expectancy. Preventing ill health can transform lives, transform our society, and reduce inequalities.

If all civilian employers did what the military does it could help close the productivity gap between the North and other parts of the UK.

So, by preventing ill health and nursing people back to health, the NHS is already making a huge contribution to society and the economy. But it can do much, much more.

The second thing I’d like to talk about is the economic boost the NHS provides to employers. I think we don’t talk about it enough.

In the US, employers spent $880 billion dollars on health insurance for their employees in 2017.

And even with the expansion of public coverage under Obamacare, employers are still the largest providers and purchasers of health insurance in the US, costing them $15,000 a year for each worker on average ‒ and with premiums going up by 5% each year.

For the biggest employers chasing the best talent, health benefits are a costly, but unavoidable part of their recruitment and retention strategy.

Yet, for smaller companies, the cost and bureaucracy has become so great that 10% of employers have dropped health coverage for their employees altogether in the past decade.

Perhaps the most perverse part of the US system, awash with all that cash and complexity, is this: it isn’t any better.

And the American health system is so spectacularly unequal. Contrast that with the NHS: a single, taxpayer-funded system based on clinical need, not ability to pay.

It’s a massive cost saving for all British employers. For British businesses trying to compete on the world stage: that’s a clear, competitive advantage.

I’m always struck when I go abroad as Health Secretary how envious employers are that in the UK companies don’t have to pay a penny in health insurance. We don’t say it enough, but the NHS is good for business.

And that brings me to my third and final point: innovation, where the NHS, again, has such an important role, and can do much, much more.

Right now, the UK is one of the most productive places in the world for health and life sciences.

We’re world leaders in pharmaceuticals, medical technologies and digital health, contributing more than £70 billion a year to the UK economy and directly employing nearly a quarter of a million people.

And the Northern Powerhouse is such a big part of that success, with more Medtech businesses than London, Oxford and Cambridge combined. Go and tell that to the Golden Triangle.

A fifth of all the people working in the UK’s life sciences are based in the Northern Powerhouse. That’s more than 50,000 jobs.

And with £1.6 billion in investments planned over the next 5 years, the North is where some of the most dynamic growth and exciting innovation is going to happen.

Liverpool and Northumbria are now home to 2 of Proton Partners International Rutherford Cancer Centres, with an initial investment of £70 million. And Rutherford Diagnostics is creating a £15 million diagnostic centre in Liverpool’s Knowledge Quarter.

And then there’s the Great North Care Record project, a new digital way of sharing medical information across health and social care providers that started in the North East and Cumbria.

I know you’re the ones who are making innovation happen. My commitment to you is this: the NHS is going to be at the forefront of that innovation because it’s one of the most valuable assets we have, both for coming up with ideas and insights, and as the largest single payer healthcare system in the world.

Technology saves time and makes life easier for our NHS staff. Technology allows them to care better for us.

That’s the reason we set-up NHSX and that will be its mission: setting tech standards and national policy, ensuring systems can talk to each other, that records can be shared, empowering the best digital minds in the NHS, and creating an ecosystem where healthtech developers are excited about working with the NHS.

The North is a powerhouse because of its people, and I’m proud to count myself as one of them.

So let’s work together. Let’s keep striving and seeking improvement. Let’s spur innovation here to drive growth across the UK, make the NHS the most innovative health system in the world and ensure Britain continues to be a world leader.