My Speech at the Dyslexia Show 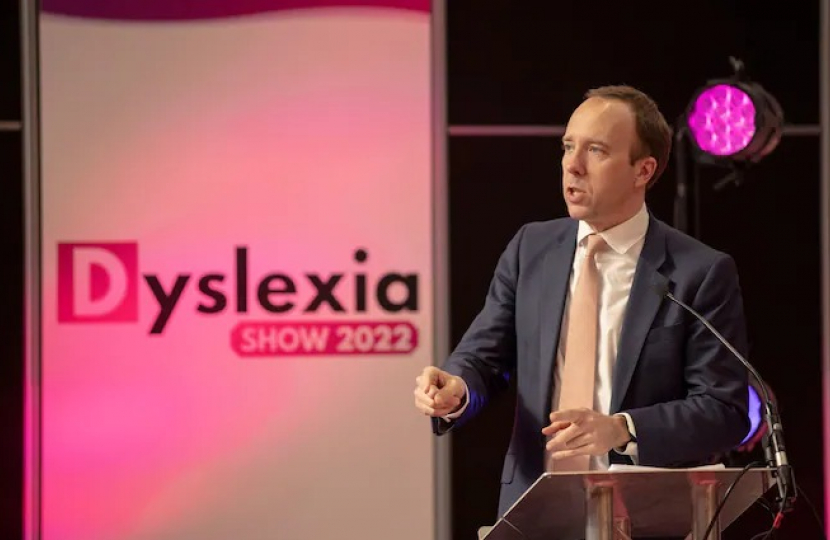 Thank you so much for inviting me to speak at this wonderful event.

I want to congratulate Arran and his brilliant team for putting on this show.

It’s a huge privilege to be here in Birmingham among the 6,000 of you who are so passionate about breaking down the stigmas surrounding dyslexia, and more importantly, championing the huge benefits that neurodiversity brings us.

And it is for this reason that I’m here at the end of Neurodiversity Celebration Week - to celebrate neurodiversity and to show that the challenges do not have to hold you back.

I found out I had dyslexia when I was 18, in my first year at University. I got through school focusing on Maths-based subjects, always avoiding any subjects where I would have to write essays.

I always just thought I wasn’t very good at reading or languages.

Thanks to my Maths and through an interview, I was able to get into University. But it was only then when I had to write essays that my tutor told me I could talk the talk, but I couldn’t get it down on paper.

The excellent education team at University sent me to be assessed. Being identified was a lightbulb moment for me. I finally understood why I often didn’t understand.

I was then able to relearn how to read and write, seeing words as shapes rather than reading them letter-by-letter. I am so grateful to my tutor and the team at University who helped me, but I know that I was one of the lucky ones. Thank you, Dr Hart!

Too many children simply do not know why they can’t read or write properly. They think, and sometimes are shockingly told, they are just “stupid” or “lazy”. In fact, estimates show that only 1 in 5 children with dyslexia leave school with their dyslexia identified.

That means 80% of dyslexic children are going into University or the workplace without the identification they need and deserve.

This is a quiet social scandal, and it’s an unaffordable economic waste of potential.

While I still find some words difficult, dyslexia is no longer so impairing to me. In fact, I find my dyslexia now brings more advantages than disadvantages in my day-to-day life.

Once identified, dyslexia can bring huge advantages. Whether through improved lateral-thinking skills, higher levels of creativity, strong memory skills, dyslexia is a superpower, and I urge everyone in this room to challenge anyone who thinks that dyslexia is simply a drawback or disability.

Because I was ashamed of my dyslexia, and kept it private for 20 years our of fear it would hold me back in the workplace.

Throughout the start of my business career, working as an economist at the Bank of England and even for the majority of my political career, I didn’t tell anyone about my dyslexia.

Only once I was in the Cabinet did I have the confidence to “come out”.

The one person I told about my dyslexia was my new private secretary as I had to explain to him that I needed a document on the top of all of my reading packs summarising the paper, to decide whether it was important enough for me to read it all, or whether I should delegate to one of my Junior Ministers.

I will never forget his response, when he told me “Matt - I have dyslexia, too. You have a duty to show every child with dyslexia that they can reach the top table.”

It was only then that I went to the Made By Dyslexia conference and spoke for the first time about my dyslexia in public.

I have to confess, I was extremely nervous. I was worried what the reaction might be. What would my colleagues say? What would the media reaction be? Would there be an unconscious ableism towards me?

I was completely wrong. I was overwhelmed with the positive feedback I received. I received hundreds of emails from people telling me about their stories with dyslexia and how hearing me tell my story encouraged them to tell their colleagues. It’s something I’m incredibly proud of.

In fact, very soon after, another cabinet minister, Brandon Lewis, came out as dyslexic too. Us Cabinet Ministers were like London buses. You don’t get one for a very long time and then two come at once.

I then got a text from an unrecognised phone number, who turned out to be Michael Heseltine. He said to me that he saw my speech and was grateful for me telling my story as he had the same experience when they were in cabinet, as he was dyslexic, too.

It was an incredible moment for me as a relatively new Secretary of State to receive such a generous text from a former Deputy Prime Minister. The only issue came when I had to put his name in my phone as I didn’t have a clue how to spell the name ‘Heseltine’. To me, it looked just like an ‘H’ with a bunch of jumbled up letters afterwards.

I then thought as Secretary of State for Health and Social Care that I would be able to finally make the vital changes that we needed, but unfortunately, the Covid pandemic happened and the team I set up to work on dyslexia had to be shifted to help with the pandemic.

But now I have the fortunate position where I can focus on one mission. To help every child with dyslexia unleash their potential.

My campaign for universal screening, teacher training and better support for dyslexia has had huge support from across the country and across political lines. It’s wonderful to be leading a campaign where I can bring people together all the way from John McDonnell on the one side to Iain Duncan-Smith on the other.

And I see my campaign in three broad areas, which of course, have links between them.

I introduced a bill to Parliament to require universal screening in all primary schools, alongside teacher training and better support for dyslexia. This strand of the campaign is making great progress, and I was delighted that just a few weeks ago, the Minister at the Department for Education committed for the first time in public to early identification and teacher training.

I will be working with the Department over the coming months to turn this ambition into a reality.

I’ll be taking my bill forward in the next session of Parliament after the Queen’s speech and I ask everyone in this room to come together to back this bill and tell your MP. We must use our collective force to tell the Government that we will no longer accept this injustice.

The second strand of my campaign is to change minds among employers.

I was delighted to see some of you at the Neurodiversity in Business launch in Parliament this week. It is fantastic that over 100 of the largest organisations have come together to agree to supporting a neuro-inclusive workplace.

We need to break down the barriers for dyslexics to get into the workplace. Right now, there is simply too much paperwork, not enough support and a lack of will to encourage dyslexic people into business.

Employers need more and more of the dyslexic superpowers and less and less of the straight-line skills computers can do.

So I’m proud to be working with Dan Harris and a cross-party team to support Neurodiversity to achieve its goals of improving recruitment and empowerment for neurodivergent people in the workplace.

The third area is vital too - because it’s not all plain sailing. Without being able to read, and without a stable job, too many people fall into the world of crime.

The third strand of my campaign is to support dyslexics in prison. It cannot be right that over half of all prisoners are dyslexics.

This week, Ofsted and HM Inspectorate of Prisons published a damning report on reading in prisons that shows we must do so much more to help prisoners get the reading support that they need to get into work and out of the cycle of crime.

Simple solutions such as equalising the payments for getting a job in prison and being educated in prisons would encourage more prisoners to choose to learn.

Helping to get reading support and reducing the copious amounts of forms involved in the legal proceedings would cost very little and yet would have a huge impact on reducing reoffending rates for dyslexic prisoners.

It is shocking that 57% of adult prisoners taking initial assessments had literacy levels below those expected of an 11-year-old and that prisoners with the greatest need to improve their reading generally received the least support.

Crucially, we must make every prison Governor accountable for getting every prisoner to read.

I know just how passionate everyone here is about these areas and I want to help you achieve our collective goal.

This won’t be easy, as there are many hurdles we still have to overcome to achieve this.

But with the hard work of all 6,000 of us here, and the country at large behind us, I am confident we can create a country where everyone sees dyslexia as a strength, not a weakness.

We've finally completed our 100 mile trek around Mont Blanc in under 4 days! It tested us to the physical and mental limit at times, but we're so proud to have finished.