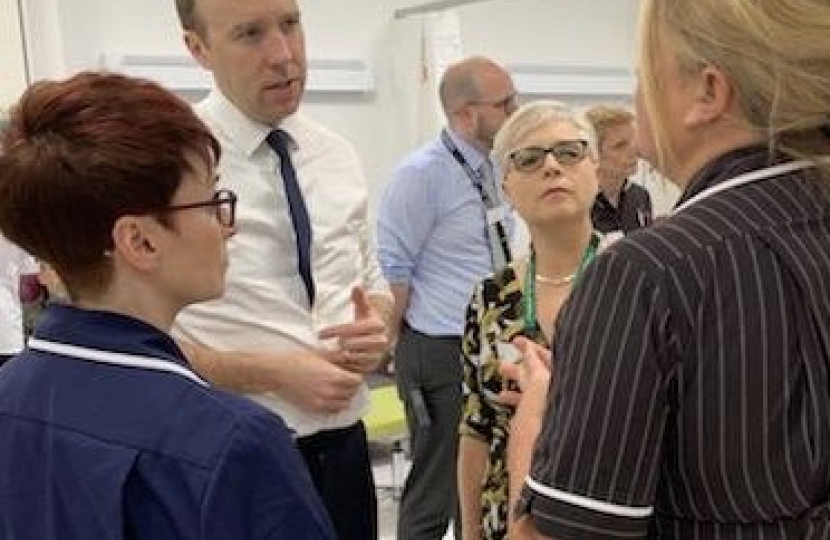 1.3 million people in the NHS.

Since I became health secretary I’ve tried to meet as many staff, from as many different parts of the NHS, as possible. Admittedly, meeting 1.3 million people individually is difficult.

And what’s clear is that people are the most valuable asset the NHS has. How we invest in, and look after, our people will determine the future of the NHS.

And that future is so important because the NHS is the most valuable public service we have.

A strong NHS, and strong public services, are the foundations of a strong society. So Britain must continue to be a place where we invest in people because we believe in the potential of people to make things better.

I am extremely grateful to both of them because taking better care of our people is mission critical to the success of the NHS.

Now, I know your time is valuable. So I’m not going to waffle on. And if you saw Good Morning Britain, you’ll know I’ve already been caught out once for too much waffle.

I want to talk to you about 3 people. Three people who illustrate where we’ve come from, where we are now, and where we need to get to.

Recruitment, retention, and an NHS that puts people first.

The first person is a nurse. She, or he, doesn’t live in this country – yet.

They’re in the Philippines, or India, or Poland, or any other number of countries around the world.

They look to the NHS as a beacon of excellence, and of opportunity. Somewhere they can come to, to be the best nurse they can possibly be.

Somewhere they can learn new skills, earn money, and return home as a world-class nurse, or stay and build a new home and a better life here in Britain.

To that nurse I say: we welcome you, we need you, we want you to come and help us build an NHS that’s fit for the future.

Because the National Health Service has always had an international workforce, from the Windrush Generation to the Warsaw Generation.

We must never forget the enormous contribution that people born beyond these shores have made to one of this nation’s greatest institutions.

The People Plan spells out how we need a new Windrush Generation for the NHS. A recruitment drive to attract the brightest and best doctors, nurses, and clinical staff from overseas.

And I want to send a very clear message to those people: if you have the talent, the skills, and the determination to pack up your hopes and dreams in a suitcase and travel to the other side of the world, then the NHS will be your new home.

Our NHS could not provide its world-class service to patients without the hardworking doctors and nurses from other nations.

The second person I want to talk about is a British student.

She, or he, is 18. They’re getting ready for their A-Level exams – hopefully not leaving it as late as I did.

They were born in this century. Technology has shaped every part of their lives from the way they shop, eat, travel, bank, socialise, and even find love.

They have more choice at their fingertips than previous generations would have had in a lifetime.

In fact, there’s so many possibilities that it can be overwhelming. And then a parent, or a perhaps a career adviser, says: “Have you ever thought about becoming a nurse?”

And this 18-year-old thinks: “I’m good at science, I’m interested in people, caring for others would be a rewarding career.”

And what do they see?

Story after story about shortages, about the stresses and the strains, and only the problems.

Never or rarely hearing about the nurses who love their jobs and wouldn’t choose to do anything else, despite the difficulties.

Now, I know there are genuine problems with the system.

That’s why Dido has taken a long-term approach to the first ever NHS People Plan so we can create a new system that puts people first, and is fit for the future.

There are shortages. We use too many agency workers when we should have permanent staff.

The job has become more challenging as the population ages and demand grows.

Your roles are more complex and you need continuous training and new technology to keep up with the pace of change.

But I fear that by only talking about the problems, we risk creating a perception that a career in the NHS isn’t for an ambitious, young, British person. Particularly when it comes to nursing.

Nursing is a first-choice career. An NHS nurse has a passport to anywhere.

In fact, it’s what makes my job so difficult because we can do a lot of things to convince people to stay in the NHS, but I’m afraid we can’t compete with the Australian sunshine.

So we’re putting a record £33.9 billion a year into the NHS – and let’s not forget three-quarters of the NHS budget goes on staff.

But fundamental to delivering the People Plan, and tackling the nursing shortage in the NHS, is changing the perception of nursing as a career.

That way we can get the right number of people and the right type of people in the NHS: talented, ambitious, hard-working, committed to caring.

Third and finally I want to talk about someone who really helped me understand the retention challenge – what it means to you, on the frontline.

He’s a senior consultant at a London hospital. And he said:

Matt, when you join the NHS, everybody knows the deal: you work hard, you do everything you can for your patients and your colleagues, you put everything into the job because at the end of it you know you’re going to get a good pension, but that’s under threat. I can’t plan ahead. I’m afraid to take on extra sessions in case I get an unexpected tax bill, and if I was a few years older I’d be thinking about taking early retirement.

And then he used a graphic but typically medical metaphor to describe the effect it’s having on the NHS. He said:

Right now it’s like a haemorrhage. If we can stop the bleeding in the first 5 or 10 minutes, we can save the patient, but if we don’t, and we leave it, then we’ll be resuscitating the body.

So I understand your frustration. Getting pensions right is how we stem the flow and convince our senior staff to stay in the NHS.

So I’ve listened to you, and I’ve learnt from you, and this is what we’re going to do:

A new pensions deal for senior nurses, doctors and GPs so you have greater flexibility and control over your pension so you don’t get hit with an unexpected tax bill.

A new pensions deal that lets you take extra shifts, go for a promotion, and ultimately rewards you for your hard work and dedication, and encourages you to stay.

We’re going to work with you to change the NHS Pension Scheme so it’s fair to you, fair to the taxpayer, and leads to better care for patients because that must be our goal.

These proposed reforms recognise the unique role and importance of NHS staff. We want to ensure the NHS Pension Scheme continues to be one of the best around so we can continue to attract the best people.

But these reforms must work for you, so we will launch a staff consultation across the NHS next month.

We will have these changes in place by the start of the next tax year. This will allow NHS staff and employers to start planning for the future with confidence and peace of mind.

And it will ensure the NHS is a place where everyone is looked after, and everyone is treated fairly.

Making the NHS a better place to work: that’s where we need to get to. This plan is the first step.

But this journey requires us all to work together: every part of our health service heading in the same direction.

I’ve made it my mission to get the right technology in the NHS so we can make your lives easier, and give you back the gift of time. So you can do what you came into the job to do: caring for people.

The NHS of the future will have more tech, more robots, more AI, but it will always have people at its core.

As the march of the machines removes the jobs that can be replaced by code, so more and more as a society, we’ll need more people doing the jobs no machine can ever do: the caring, the empathy, the connection.

So, we will make the NHS a more caring employer.

We will transform the culture.

The NHS of the future will always put people first.

Because a strong NHS, and strong public services, is how we build a Britain that always put people first.

That is a place we all want to get to.

That’s the country we all want to live in.