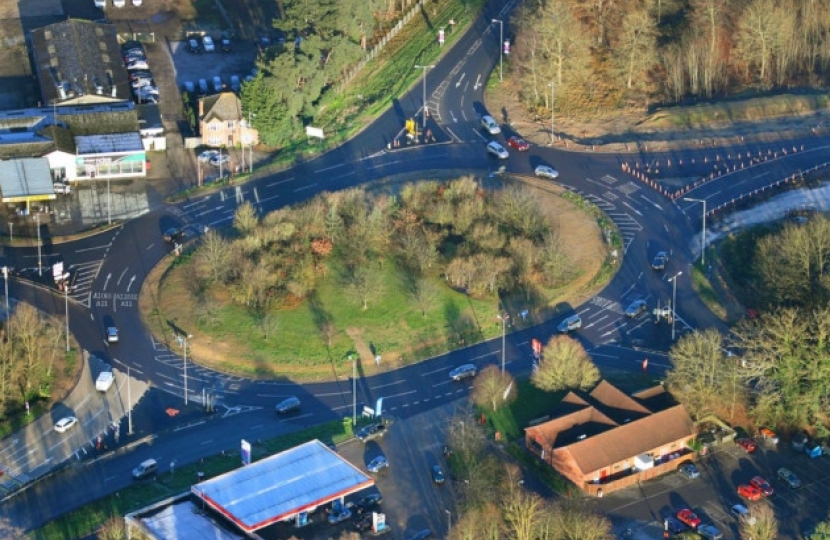 Driving around my West Suffolk constituency recently, I passed through the Fiveways roundabout at Barton Mills.  As many of you may know, improvements to the roundabout are well underway. After my two year-long campaign to get funding for traffic lights and other structural changes to Fiveways, the works commenced in September.

The problems with Fiveways go back quite a long time.  Fiveways is the junction where the A11 to Thetford intersects with the A1101 to Mildenhall and Bury St Edmunds and the A1065 to Brandon.  At one time it marked where the A11 went from two lanes down to one, thus causing tailbacks on the stretch of the road to Thetford Forest.  It was a truly awful situation, the A11 could not cope with increasing amounts of traffic and the persistent tailbacks were extremely frustrating for motorists. But since the completion of the dualling of the A11 in 2015, something I also campaigned for when I was first elected back in 2010 and then delivered on, the new pinch points are on the other roads that approach Fiveways, with drivers finding it very difficult to merge safely on to the roundabout.

After a few years of lobbying the Department for Transport and Highways England and meeting with ministers and other officials, funding of £400,000 was granted for traffic lights, which will address traffic and congestion. Furthermore, £2.8m has been allocated for smaller traffic improvement schemes nearby, thus making the entire area easier to travel through for the tens of thousands of motorists who use those roads daily.

I will be anxious to see how the traffic lights help with both congestion and road safety.  The works are due to finish at the end of November, just in time before we go into winter with its more challenging driving conditions.  Safety has to be the number one priority at Fiveways, and based on the traffic surveys carried out in advance of granting the money for upgrade, it was viewed that signalling would indeed help, allowing motorists from the smaller roads their turn to merge safely on to the roundabout.

This is hopefully the last we will hear about Fiveways, a roundabout beset with problems over many years.  It will be a fantastic day when we finally consign the numerous accidents and delays at Fiveways to history.   I welcome these changes at Fiveways and I will continue to campaign on behalf of my West Suffolk constituents for improvements to our road network so it will be of the high standard that motorists need and deserve. Wishing all of you very safe travels on the roads of Suffolk.