An Update On My Dyslexia Campaign 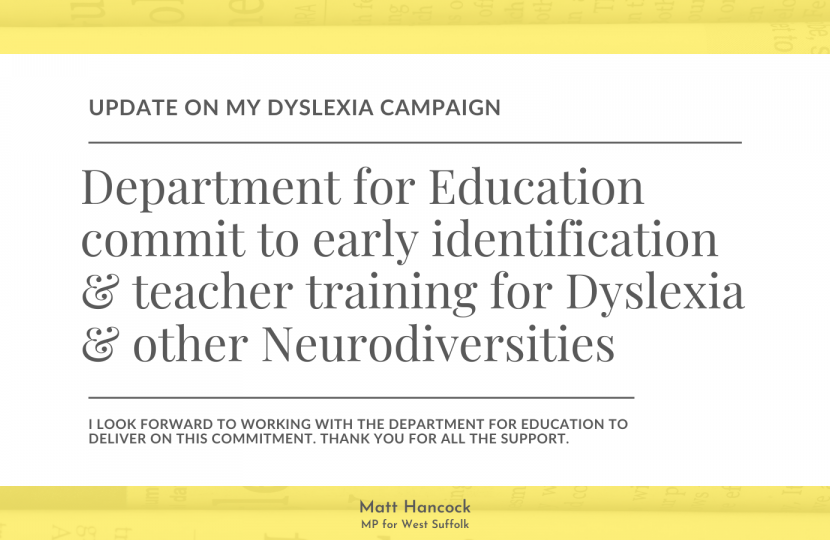 An Update On My Dyslexia Campaign:

I have been working with the Department for Education to highlight to them the current injustices in the way we support people with dyslexia in this country.

The response from the Department has been very positive. I met with Minister Will Quince last week, and he has asked me to work with the Department on the SEND Green Paper and the Schools White paper. I will also be holding a roundtable with Minister Quince and experts in this space, to discuss how we can best achieve the necessary progress on early identification for dyslexia, to ensure children get the support they need.

Interestingly, on teacher training, Minister Quince's focus was on ensuring proper teacher training for all forms of neurodiversity, which I have also been campaigning for.

I also have an update on my Dyslexia Screening Bill too. As I now have assurances from the Minister that he will work with me to achieve our goal, I have decided to change Parliamentary tactics. The Bill cannot now become law in this session so I have decided instead to reintroduce the bill in the next session of Parliament after the Queen's Speech. This will allow us to keep the pressure up on the Department, and take into account the SEND paper. In the meantime, I will work with the Department for Education and push them to take up Government legislation in this area.

We are making progress on our common aim of universal screening, ultimately to equalise the opportunities for dyslexic children. After all, every child deserves a good education.

I am also working with businesses to change the way that neurodivergent people are recruited and working with the Centre for Social Justice to help dyslexic prisoners out of the cycle of crime and into employment.

We must keep up this important campaign.

My sincere thanks and gratitude go to you and all the neurodiversity campaigners who I have been working with, the supporters of my campaign in Parliament and the public, and to the Ministers and Officials at the Department for Education for their clear commitment to this agenda.

We've finally completed our 100 mile trek around Mont Blanc in under 4 days! It tested us to the physical and mental limit at times, but we're so proud to have finished.