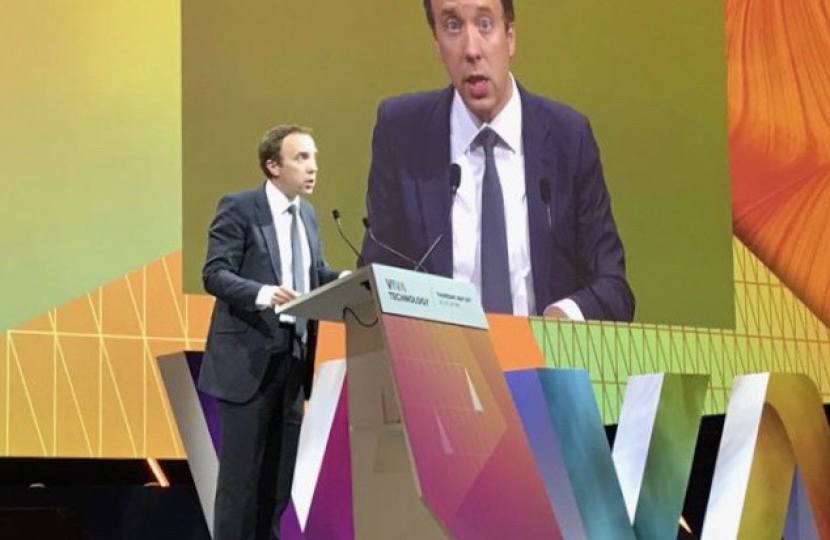 [Good afternoon. It is an honour to be here at VivaTech today]

[One of my most formative memories came when I was watching TV at the age of twelve years old. I vividly remember the scene.]

[Two sets of workmen meeting and embracing after years of hard work tunneling and breaking ground.]

[Through a tiny hole in the rock, 100 metres under the sea, they shook hands and exchanged the Union Jack and the Tricolore.]

[Together our two countries had built the longest undersea railway tunnel in the world - the Channel Tunnel.]

The Channel Tunnel impressed on me, even at that young age. First, because the enduring bond and friendship between the UK and France.

And second because it showed the power of technology to bring us closer together and to make the world a better place.

Since then, of course, much has changed. The new frontiers today are in digital technologies, like artificial intelligence, that will transform the world like never before.

But this transforming force can sometimes raise of course new challenges and new questions and can cause new concerns about its impact.

During one of the first flights of Concorde, another pioneering UK-French project, the British Government’s Minister of Technology asked his fellow passenger how he was feeling.

He said he was so nervous about travelling on a supersonic aircraft that he’d taken last Communion before the flight. The minister asked what he did for a living. He said “I’m one of the engineers”.

But whatever the barriers, our two countries have never shied away from embracing change.

And we must not shirk at the next challenge. There are two things that I want to say, coming here from the UK perspective.

First, we must recognise the powerful force for good in these technologies, which help us live longer and safer lives, give us trusted guides for decision making, help us drive more safely while reducing congestion, and bring people closer together.

We must protect our environment by using the planet’s resources more efficiently using new technology.

And of course make governments smarter using the power of data to improve public services.

In the UK, we have been straining every sinew to make the most of this, and drive forward this broad programme of work.

Over the last decade since 2010, we have introduced cutting-edge reforms to drive this digital technology in Britain.

We have built the UK into the leading tech hub in Europe and one of the leaders around the world.

And we have used digital technology to transform Government and build our Government Digital Service.

The message is very clear: we must not rest on our laurels. Last year, we published our review into artificial intelligence and just last month we launched a billion pound deal to make sure we stay at the first rank of AI economies.

We are investing further billions in the most hi-tech infrastructure, like full fibre and 5G.

And we are putting skills at the heart of the education system, digital skills, including making coding compulsory at school and funding more PhD places.

In the past week alone, we have announced plans to expand the use of AI in our health sector.

Use the latest machine learning technology to equip doctors with the most advanced AI technologies, and Samsung have announced a new artificial intelligence research centre in Cambridge - another endorsement of the UK’s creativity, innovation and enterprise.

And last week London was once again ranked as the leading tech hub in Europe.

But the second thing I want to say is that we simply cannot work alone.

The nature of this technology is that working together is more valuable than ever before.

The nature of information and of coding, as a source of prosperity, is that it is infinitely replicable.

If one of us builds a technology then it is available for all. And this is fundamentally different to previous waves of technology.

So to make the most of new digital technologies, we need to work together and build common ground.

I’m delighted at the progress France is making. I pay tribute to President Macron’s leadership and how, along with Mounir Mahjoub​i and the rest of the French government, they are making the case for digital technologies in France.

Already the third best place in Europe for digital scale-ups, Paris is well and truly en marche. And our view of this from the UK is that this is wonderful to see.

Finally I just want to say a word or two about the kind of technology that we must build together.

Becuase fundamentally this is about building technology not just to replicate human functions but to improve the human experience.

We are moved by the potential and the power of artificial intelligence to bring freedom and change for the better.

We have got to ensure we build these algorithms, right from the start, with the right ethical underpinning.

And just as we developed rules for the printing press and the motorcar, now is the time to create the laws and the norms that will shape the future of AI.

Algorithms are becoming increasingly complex, and at times opaque. Yet they are being entrusted with more and more decisions.

How does a human, for instance, know they are communicating with an AI assistant or a human assistant?

What do we do if algorithms start to reflect subconscious biases around gender and race?

What decisions, if any, can be left with an algorithm on the battlefield?

These are real questions and we must as a society confront them.

In the UK we are taking a lead by establishing our Centre for Data Ethics and Innovation.

It’s a world-class advisory body to make sure data and AI delivers the best possible outcomes for society, in support of its innovative and ethical use.

It’ll work with the likes of Microsoft, Deep Mind and IBM and others who are all thinking about and talking about the importance of this ethical underpinning.

But no country will thrive by pulling up the drawbridge and thinking they have all the answers.

So it is a priority that we work with international partners and garher opinion from around the world.

Because this sharing of ideas across borders is crucial to develop a AI that serves humanity.

Just as GDPR, which of course comes into force tomorrow, has broken new ground in setting standards for data protection.

And I can see GDPR setting standards around the world.

So the UK-France relationship on this technology is so important. I look forward to working with France over the months and years ahead to seize the benefits of fast-developing technology.

Because we are stronger together.

[Throughout history our two nations have worked together to smash barriers and make the impossible possible.]

[AI is the new frontier. And like all new technologies, it has immense power to serve humanity and enhance freedom and opportunity across the world.]

[The governments, and economies, that succeed in this new world, will be those that make the most of this.]

[And we must do this together, based on three ancient principles.]

[Liberty, so we work together for the freedom of mankind.]

[Egalitie - so we help build new technologies that work for everyone]

[And fraternite - so we work together as friends and neighbours.]

[These are the enduring principles of France that will guide us as we move forward.]

[And if we succeed, we can chart a new path, and make technology work for everyone.]