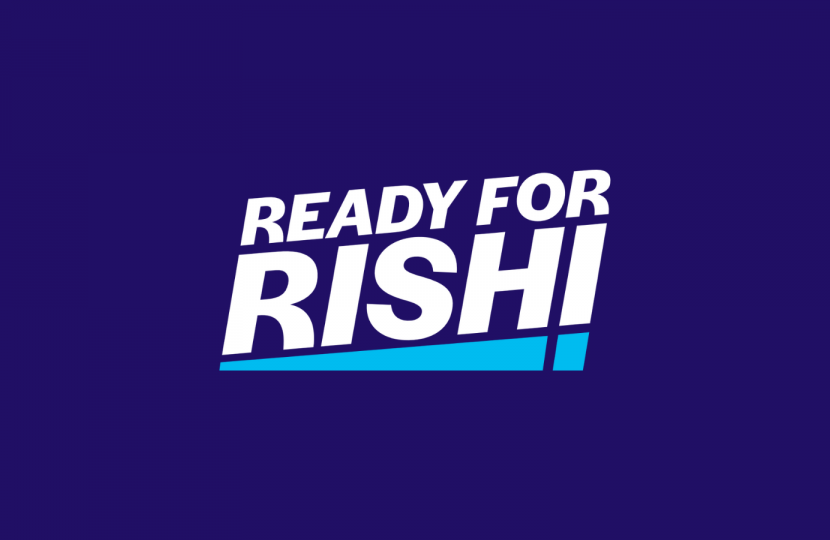 Every week that I go back to Westminster from my West Suffolk home, I feel an immense level of pride and responsibility to be able to represent over 80,000 people in the heart of our democracy.

For over a decade, I have had the privilege to be your voice in Westminster and in the coming weeks, I alongside my colleagues have the responsibility of selecting the next Prime Minister.

After careful consideration, I have come to the overwhelming conclusion that Rishi Sunak is the right person to take this country forward.

I know and have worked with all of the brilliant candidates, and despite all of their many qualities, Rishi Sunak has the plan, the character and the experience to deal with the challenges that we face.

I supported Boris Johnson in 2019 as we needed a leader who could end the Brexit paralysis, defeat Jeremy Corbyn and deliver an optimistic, free market, forward-looking domestic agenda.

As Prime Minister, Boris delivered three huge things. He got Brexit done, he saw us through the pandemic, largely thanks to the work we did together being first in the world to vaccinate, and he united the West against Putin’s vile aggression.

Now we need fresh leadership for the next stage.

In deciding, my first thought was about the what, how, and why - before the who. When deciding on a Prime Minister, it’s vital to work out what they need to stand for, how they would govern, and why they want to hold that great and extraordinary responsibility.

Rishi ticks all the boxes. I worked very closely with him in the pandemic in some of the most difficult circumstances that any Government has had to deal with in peacetime. I’ve seen him deal with the pressure. He is a man of fine judgement and good character. And he’s got a credible plan - serious and realistic - to get us through.

He also has the potential for very broad appeal.

If we just talk inwards and retreat to a narrow ideological base we will lose the Conservative party the next election and risk a deal between Sturgeon and Starmer - because neither of them can win an election on their own. That would inevitably lead of a referendum on Scottish separatism and the risk of breaking up the Union. It is the duty of the Conservative and Unionist party to prevent this from happening.

Rishi Sunak is the best-placed candidate to unite the party behind a clear vision through to the next General Election.

We need a leader, we need a Prime Minister, who can unite North and South, young and old and urban and rural. Rishi is that person.

In 2019, we were able to unite the country all the way from Newbury to Newmarket to Northumberland. This was not only because of Brexit and the risks of letting the hard-left Jeremy Corbyn into Government, but because of our forward-looking optimistic vision for the country. Against a heavily divided opposition, we showed we were ready to lead.

But we aren’t against Jeremy Corbyn next time. The opposition is a far greater electoral challenge than 3-years ago, so we have to up our game and reach out beyond our base.

Our new Prime Minister needs to have the integrity, seriousness of purpose, and competence - as well as charisma - that’s necessary for success in that job. These things appeal to traditional Tories, new Tories, and frankly anyone who cares about how we are governed.

Next, we need someone with the experience of delivering in government. With the huge challenges facing the country we need someone with experience of governing in tough times. I have governed with many of the candidates, and I know many of them have this in spades. But although I like many of my less experienced colleagues, like Tom Tugendhat and Kemi Badenoch, I don’t think now is the time for someone untested.

More than integrity and experience, we cannot just focus on ourselves.

A shocking report by the think tank Onward showed that the average age people shift from voting Labour to Conservative is now shockingly 51. Less than a decade ago, the tipping point was 34. This is unsustainable for the electoral success of our party and shows that we need to deliver the opportunities young people want and enact policies that benefit them.

Speaking with Rishi, I know he is determined to reach out beyond our base and unite the country.

We need seriousness of purpose in economic policy too. Too many candidates are promising unfunded tax cuts, but it’s quite wrong. We must not feed inflation - we must get it under control. We have to be honest with the public that dealing with this will involve difficult decisions.

As Conservatives, we believe in both lower taxes and fiscal conservatism. We understand that we cannot continue to borrow and spend our way to prosperity, especially given the inflationary pressures we face now. We owe it to our children and grandchildren that we will act with prudence, so they do not have to repay our debts.

If we don’t grow our economy, we won’t be able to invest in crucial public services that West Suffolk constituents rely on, such as the Haverhill Health Hub or our railway links - like the one between Haverhill and Cambridge, which I have campaigned on for many years.

We need to be backing businesses, reducing regulation and driving trade deals across the world, all the while promoting our liberal values on the global stage. Whether you voted for it or not, the opportunities of Brexit are there to seize, especially reducing the regulation that is still on our statute book. We must do this at the same time being Ukraine’s steadfast ally, tough on crime, razor-sharp on security, tough on illegal immigration while attractive to the best talent.

Before deciding which candidate I was going to support, I polled my constituents and I am glad that they have come to the same conclusion as me, that Rishi Sunak has all the qualities needed to be a brilliant Prime Minister.